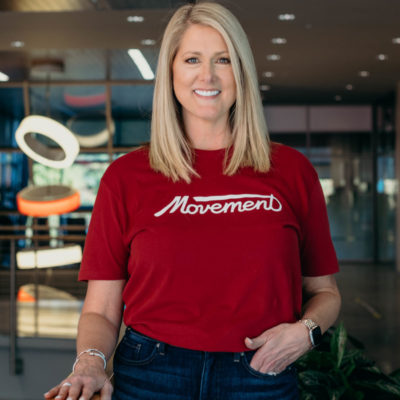 As a market leader, Rogers (NMLS #356776) will lead Movement’s loan production and growth in Texas’ premier real estate market. As a coach, Rogers joins the next iteration of Movement’s coaching platform to develop Movement loan officers throughout the country. Rogers first joined Movement in 2016 as a branch manager, and has held various leadership roles during her time at Movement.

“We’re excited for what’s to come under Kelly’s leadership,” said Matt Schoolfield, divisional leader at Movement. “Her grit, determination and passion are unparalleled. This is a huge win for Movement, to have Kelly leading and coaching top producers in Houston and across our company.”

Rogers is one of the leading mortgage lending professionals in the Houston area. With over 19 years of experience, she spends her days coaching, mentoring and training loan originators and real estate professionals to support them in achieving their personal, professional and financial goals. She is intent on serving alongside her teams and making a significant impact in their lives as well as the communities they serve.

“Kelly lives her life from a place of grace and tremendous resilience. We’re so blessed to have her join Movement’s coaching team,” said Chief Growth Officer Sarah Middleton. “Kelly’s new roles will expand her reach and influence to so many people, especially our women to help them grow, thrive and achieve so much more than imaginable. I personally am so excited to have Kelly as a coach and market leader!”

“I am excited to return to the Houston market serving the deep relationships I have fostered through years in our real estate community,” says Rogers. “Adding the opportunity of coaching top producing loan officers across the country in the new coaching role is icing on the cake!”

When not working, Rogers spends her time traveling and exploring with her husband, Michael. They have five adult children, who they spend as much time as possible with, along with two canine sidekicks, Bane and Angus. Rogers has been recognized as a top mortgage lender by publications including Mortgage Executive Magazine, Texas Monthly Magazine’s Five Star Professional and National Mortgage Professional’s Elite Women in Mortgage.

About the Author: Allison Jones