Milchuck (NMLS #156726) brings to Movement over 16 years of finance industry experience, having most recently spent nearly a decade at First Bank as a regional sales manager, where she was a top producer in 2020 ($139M) and 2021 ($134.5M). Milchuck was listed in Scotsman’s Guide as a Top 200 Female Originator and a Top VA Lender in the country. 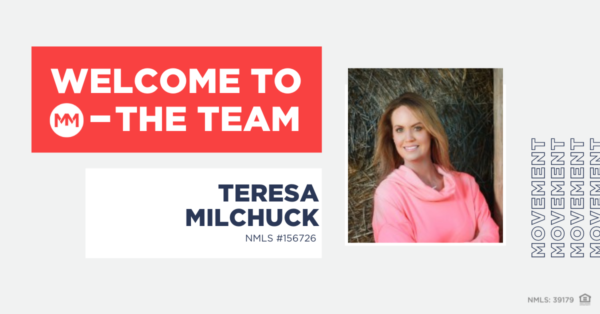 “The obvious reasons I chose to join Movement are the products available and the support this company offers their employees,” said Milchuck. “I believe the future in mortgages will require creative financing for many, as well as the ability to pivot quickly in an ever-changing environment. But there’s also the impact on many less fortunate through vision trips. That sets Movement apart from any company I have ever known.”

“We are very intentional in our search for a market leader who shares our culture, values and long-term goals,” said Massey. “Teresa’s focus and passion for the mortgage industry are two of her attributes that impress me the most. She commands respect amongst her peers and a love and concern for each team member. She’s the right choice to lead us in Alabama!”

“I felt welcomed immediately,” said Milchuck, “but in saying this, I am the one who is blessed to call Movement Mortgage my home.”

A longtime resident of the Huntsville area, Milchuck and her husband of 28 years, John, have two sons, Jacob and Noah, and two granddaughters, Ridley Grace, three, and Laikyn Tyler, who recently turned one. “Obviously, every single second of my free time is spent with them,” said Milchuck.